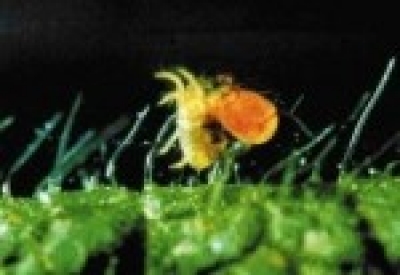 Be the first to review this product
Product ID: NF10
Price:
$38.50
Product is out of stock

ENVIRONMENT: Does best in moderate to cooler humid conditions, but will also tolerate warmer temperatures

PESTICIDES: Susceptible to pesticides. Pyrethroids are highly toxic. Field tolerance will vary with spray timing, application methods, weather and crop. Avoid spraying crop one week before or after releasing predators. Some materials may be toxic to predators for up to four weeks.

STORAGE: Highly perishable, should be used immediately upon delivery. If storage is absolutely necessary, refrigerate at 50° F. (6°-10° C). Not to exceed 2 days, to minimize mortality.

AUGMENTATION: Release rates are being developed. Release at least one per plant or one per square foot in greenhouses at the first sign of spider-mites. Later releases will require much higher numbers to be effective.

A complex of predatory mites attack spider mites, the family Phytoseiidae being of the greatest importance. A complex of these species feed on spider mites in unsprayed trees; however, in sprayed orchards the phytoseiid Amblyseius fallacis generally assumes prominence. It is more tolerant of organophosphate-based spray programs than are many of the other species in the family, and several studies showed it was the only predatory mite to remain common in sprayed orchards throughout the year. Nevertheless, is subject to mortality induced by pesticides; it is important to note that some fungicides and herbicides are disruptive to populations of Fallacis, in addition to insecticides. For example, work in Michigan has shown that benomyl poses risk to Fallacis from direct contact toxicity (more pronounced in immatures), ovicidal action, and permanent reduction in oviposition caused by secondary poisoning (consuming treated prey mites). Toxicity of specific pesticides is provided in other extension publications. This predator is present throughout much of North America, but is most important in the eastern states, Resistant strains have been introduced from North America into New Zealand.

II. Hosts: Fallacis feeds on a variety of mite species, but exhibits little cannibalistic behavior. It is capable on feeding on all prey life stages. It prefers to feed on spider mites, but will also feed on the apple rust mite in the absence of more preferred prey.

III. Description: This mite (Plate 135) is similar in size to somewhat smaller than the European red mite. It is straw-colored to almost white, depending on age and recent food sources. It is flatter in shape than the relatively dome-shaped spider mites, and has fewer hairs protruding from the body than spider mites. Viewed from above, Fallacis is oval to somewhat pear-shaped.

IV. Biology: Fallacis spends the winter in the orchard ground cover, where it feeds upon overwintering twospotted spider mite and other mites (recent research in New York indicates that a portion of the population may also overwinter on the tree). Completely bare ground does not support the community including Fallacis; however complete ground cover is not required to support predators. Research in eastern New York indicates that as little as 20% ground cover will support the complex. During the spring (May and June) mites disperse upward into tree canopies, where they provide mid- and late-season biological control of European red mite. Research in Michigan has revealed that the three most important factors influencing dispersal of Fallacis into the canopy are degree-day accumulation, initial density of predators in the ground cover, and prey density in the tree. When spider mites or rust mites (15 ARM approximate one ERM in the diet of Fallacis) were present in adequate numbers, this predator appeared in the trees after 600±100 DD54 after January 1. Spring frosts or freezing rains may suppress activity of this predator while it is still in the ground cover.

Females represent 66-75% of the adult population. These females lay 1-5 eggs per day for their adult life, which lasts from 1-81 days (average 41) at 80 degrees F. Higher egg production is achieved with greater prey availability. At 70 degrees F, the life span is somewhat longer, 24-80 (average 62) days. The period from egg deposition until emergence of adults is 7.3 and 3.3 days at 70 degrees F and 90 degrees F, respectively. The complete life cycle generally takes 7-9 days.

Fallacis uses two alternative foraging patterns, as demonstrated by research in Nebraska. When prey are plentiful, a random walking pattern is used, allowing them to utilize mites on a leaf most efficiently. When prey are scarce, the predators walk along leaf edges, increasing the chance of moving to a new leaf. Research in Michigan has revealed that this predatory mite exhibits a dispersal behavior which aids in distribution among trees. Individual mites assume a stance that allows them to be carried off on a breeze; this behavior is most pronounced when prey are in low numbers. Massachusetts research has shown that Fallacis uses chemical signals from prey silk and feces to hunt prey, and furthermore uses its own marking pheromone to mark previously searched areas.

Research in Michigan has yielded tentative thresholds for predicting success of biological control by Fallacis. A predator-to-prey ratio of at least 1:10 presents a good probability of biological control. Higher ratios increase the probability of success. Lower predator-to-prey ratios (e.g., 1:20) may result in successful control on some apple varieties less conducive to spider mite reproduction than `Delicious'.

V. Injury: Predatory mites do not injure the trees or crop in any way.
Login or Register to write a review.

Amblyseius swirskii, a predatory mite that's not all that picky when it comes to its daily meal. It eats many species of small insects and mites, which is ideal when different types of pests occur simultaneously. Amblyseius swirskii is primarily known as a thrips predator that is ideal for warmer climates as it is native to the Mediterranean. It feeds not only on thrips, but also broad mites, russet mites, as well. If you want to gradually apply predatory mites, the Swirski-Mite slow-release sachets are a better choice. These bags contain the predatory mites, food, and bran for protection. The mites reproduce in the bag and move from there into the crops. The slow release will last up to 4 weeks.
Price:
$69.85

Amblyseius swirskii slow release 500 sachets of 250 swirskii per sachet. total of 125,000 swirskii.
The generalist predatory mite A. swirskii is widely used against whiteflies, thrips and is also very effective in controlling broad mites and russet mites. If you want to gradually apply predatory mites, the Swirski-Mite slow-release sachets are a better choice. These bags contain the predatory mites, food, and bran for protection. The mites reproduce in the bag and move from there into the crops. The slow release will last up to 4 weeks.
Price:
$198.45 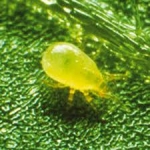 Neoseiulus Amblyseius fallacis, the All-Purpose predatory mite, is used for the prevention, control, and management of various spider mites. These mites are voracious predators of several pestiferous spider mite species. N. fallacis can prevent and control a number pest mites in a multitude of conditions. Some of the species they can impact include: the two-spotted mite, carmine red mite, European red mite, citrus red mite, southern red mite, six-spotted mite, privet mite, cyclamen mites, broad mites.
Price:
$38.85
Product is out of stock

The Neoseiulus californicus predatory mite is good resistance to drought and is more resistant to chemical pesticide. It’s effective against various spider mites, and two spotted spider mite (Tetranychus urticae), fruit spider mite (Panonychus ulmi ), citrus red mite (Panonynchus citri), begonia mite (Tarsonemus pallidus), broad mite (Polyphagotarsonemus latus) The advantages of Neoseiulus californicus in slow-release bags are savings on labor, compared to manual release. The N. californicus Improved preventative capabilities and trouble-free application with excellent combative action. Keep in mind that the N. californicus is designed as slow release sachets for preventive introductions. If presence of N. californicus is needed quickly, it is recommended to introduce from bottles at the start of the program. You will receive 100 sachets/box producing 1,000 californicus per sachet. The advantages of Neoseiulus californicus in slow-release bags improved preventative capabilities and excellent combative action. Also useful to control tarsonemid mites such as the broad mite and the cyclamen mite. The sachets will last 3-4 weeks use for preventive.
Price:
$124.85