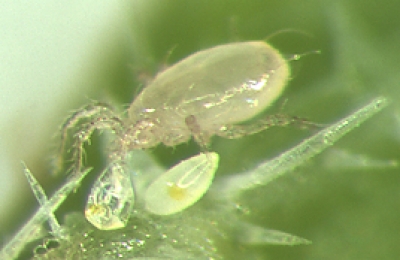 Be the first to review this product
Product ID: SM25
Price:
$64.25
The selected item is out of stock, please select a different item or combination

The generalist predatory mite A. swirskii is widely used against other pests such as thrips and whiteflies and is also very effective in controlling broad mites. Amblyseius swirski means a much more stable biological system for plant and crop protection. It not only effectively tackles thrips and whitefly, but also attacks spider mites. Moreover, the predator is extremely mobile and has good searching behavior. Because swirskii attacks a number of pest insects, it can maintain its population even when there are no more thrips on the plants. Swirskii remains present and can act as soon as thrips reappear. Amblyseius is a beneficial predatory mite endemic to the Eastern Mediterranean region. This species is considered a generalist predator, and readily consumes small soft-bodied pest species as well as pollen or plant exudates. Amblyseius swirskii has attracted substantial interest as a biological control agent of mites, broad mites, thrips and whiteflies in greenhouse.

Amblyseius swirskii is commonly used to control whitefly and thrips in greenhouse vegetables (especially cucumber, pepper and eggplant) and some ornamental crops.Since Amblyseius swirskii is not susceptible to diapause it can be used throughout much of the season. This species is considered a generalist predator, and readily consumes small soft-bodied pest species as well as pollen or plant exudates. Amblyseius swirskii has attracted substantial interest as a biological control agent of mites, thrips and whiteflies in greenhouse and nursery crops. The mites are released directly in the crops in bran or vermiculite carriers sprinkled on the leaves or substrates.

Amblyseius swirskii is documented to feed and reproduce on a wide range of prey from several orders, including thrips (western flower, onion, melon, and chilli), whiteflies (greenhouse and silverleaf) and plant feeding spider mites.

Amblyseius swirskii is supplied in shaker cans, mixed with bran. There are cans available with different contents and numbers of predatory mites. The shakers are primarily intended for light curative introductions (if whitefly or thrips are present). In crops with sufficient pollen, such as sweet pepper and aubergine, the predatory mites in shakers can be released preventatively once the crop is flowering.

The advantages of the slow-release bags are summarized below: **For the 25,000 count, 100 sachets per box of 250 A. Swirskii per sachets for slow released.

Mesoseiulus longipes is similar to P. persimilis but can tolerate lower humidity (40% at 70 degrees F). M. longipes are effective in temperatures up to 100 degrees F, although a comparable increase in humidity is required. Apply these predators in warm greenhouses and interiorscapes with artificial lighting. The lifespan of the adults, the form in which they are shipped, is 34 days. Release rates indoors, 3/sq. ft. bi-weekly, 1-2 times; outdoors, 5,000-20,000/acre, bi-weekly, 1-2 times.
Price:
$42.50
Product is out of stock

The Neoseiulus californicus predatory mite is good resistance to drought and is more resistant to chemical pesticide. It’s effective against various spider mites, and two spotted spider mite (Tetranychus urticae), fruit spider mite (Panonychus ulmi ), citrus red mite (Panonynchus citri), begonia mite (Tarsonemus pallidus), broad mite (Polyphagotarsonemus latus) The advantages of Neoseiulus californicus in slow-release bags are savings on labor, compared to manual release. The N. californicus Improved preventative capabilities and trouble-free application with excellent combative action. Keep in mind that the N. californicus is designed as slow release sachets for preventive introductions. If presence of N. californicus is needed quickly, it is recommended to introduce from bottles at the start of the program. You will receive 100 sachets/box producing 1,000 californicus per sachet. The advantages of Neoseiulus californicus in slow-release bags improved preventative capabilities and excellent combative action. Also useful to control tarsonemid mites such as the broad mite and the cyclamen mite. The sachets will last 3-4 weeks use for preventive.
Price:
$124.85

Amblyseius swirskii slow release 500 sachets of 250 swirskii per sachet. total of 125,000 swirskii.
The generalist predatory mite A. swirskii is widely used against whiteflies, thrips and is also very effective in controlling broad mites and russet mites. If you want to gradually apply predatory mites, the Swirski-Mite slow-release sachets are a better choice. These bags contain the predatory mites, food, and bran for protection. The mites reproduce in the bag and move from there into the crops. The slow release will last up to 4 weeks.
Price:
$198.45

ENVIRONMENT: Does best in moderate to cooler humid conditions, but will also tolerate warmer temperatures

PESTICIDES: Susceptible to pesticides. Pyrethroids are highly toxic. Field tolerance will vary with spray timing, application methods, weather and crop. Avoid spraying crop one week before or after releasing predators. Some materials may be toxic to predators for up to four weeks.

STORAGE: Highly perishable, should be used immediately upon delivery. If storage is absolutely necessary, refrigerate at 50° F. (6°-10° C). Not to exceed 2 days, to minimize mortality.

AUGMENTATION: Release rates are being developed. Release at least one per plant or one per square foot in greenhouses at the first sign of spider-mites. Later releases will require much higher numbers to be effective.

NOTES: This predatory mite disperses quickly. Neoseiulus fallacis is known to control European Red Mite below economic thresholds in fruit tree orchards. it is also being successfully used in mint fields.
Price:
$38.50
Product is out of stock