The green lacewing is another one of the most effective predatory insect known.

THE "APHID LION" After a few days, the eggs hatch and tiny larvae emerge which are also known as"aphid lions" because of their voracious appetite. There is no other better predator known to consume vast quantities of eggs and the soft bodies of aphids, mealy-bugs, spider mites, leafhopper nymphs, caterpillar eggs, scales, thrips, and white-flies. The lacewing larvae attack the eggs of most pests and, if the bodies are not to hard and fast moving, will attack the adult pest stage as well.

Use lacewing eggs/larvae for greenhouses and gardens. Larvae will only feed for 1-3 weeks before they become adults (eating only nectar and honeydew). Use approximately 10 lacewing eggs/larvae per plant or 1000 eggs per 200 square feet. After a few days, the eggs hatch and tiny larvae emerge. The larvae are gray-brown in color and newly hatch are very tiny. Similar in appearance to an alligator with pincers, the lacewing larvae vigorously attacks its prey, injects a paralyzing venom, and draws out the body fluids of its helpless victim. Depending on climate conditions, the adults will live for about four to six weeks, feeding only on nectar, pollen and honeydew. If these food sources are not avalable, it will simply leave the area and lay its eggs elsewhere.

Green lacewing eggs are shipped in bran or rice hulls and packed with moth eggs for food. The best time to release is early morning or later afternoon. Never release in the heat of the day. For best results, immediate use is advised however, when release is inconvenient, they can be stored in the refrigerator for up to 48 hours. Warmer temperatures will speed up their emergence and newly hatched lacewing larvae are hungry and will cannibalize each other if they are not released quickly.

If the infestation has not been arrested after 5 to 7 days, additional releases may be necessary. When releasing on a regular schedule, change the release sites within the target area to get maximum coverage. 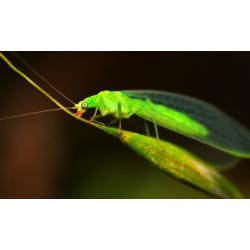 The Green lacewing larvae is the most beneficial stage with the lacewings. They feed on soft-bodied insects like aphids, but will also feed on caterpillars and some beetles. The biggest benefit of lacewing larvae is how aggressive they are. They will eat anything they can catch, and they are always hungry. They’re also cost effective, especially the eggs. They have the ability to quickly knock down moderate levels of aphid infestations, as well as help control many other pests.
Green Lacewing eggs are oval and pale green. Just before the larvae hatch, eggs turn gray. The eggs are shipped in vials with food and a carrier such as rice hulls, bran or vermiculite.
Price:
$17.95

Lacewings stay where you place the cards in your garden, and the larvae are voracious feeders on those pesky bugs. The larvae are voracious predators used to control a wide range of soft-bodied pest insects. Green Lacewings larvae eat aphids, mealybugs, spider mites, leafhopper nymphs, moth eggs, scale, thrips, and whiteflies. The best time to release is early morning or late afternoon. The cards can be stored at no lower than 50°F for up to 48 hours.


The eggs are on perforated hanging cards, hang the cards, from the hole in the card, near the underside of leaves in the target area.

Green lacewings are generalist predators and are commonly found in agricultural, landscape, and garden habitats. Adult green lacewings are soft-bodied insects with four membranous wings, golden eyes, and green bodies. Adults often fly at night and are seen when drawn to lights. Some species of green lacewing adults are predaceous; others feed strictly on honeydew, nectar, and pollen. Females lay their tiny, oblong eggs on silken stalks attached to plant tissues. Depending on the species, eggs are laid singly or in clusters, each on an individual stalk. Eggs are green when laid, and then darken before hatching. Lacewings undergo complete metamorphosis with eggs hatching about 4 days after being laid, and larvae develop through three instars before pupating. Larvae, which are pale with dark markings, look like tiny alligators. Larvae are flattened, tapered at the tail, measure 3-20 mm (1/8 to 4/5 of an inch) long, have distinct legs, and possess prominent mandibles with which they attack their prey. Larvae prey upon a wide variety of small insects including mealy-bugs, psyllids, thrips, mites, whiteflies, aphids, small caterpillars, leafhoppers, and insect eggs. Pupation occurs in loosely woven, spherical, silken cocoons attached to plants or under loose bark. All stages of lacewings can survive mild winters and can be found throughout the year in many agricultural areas of California. Green lacewings are commercially available and are among the most commonly released predators.

Lacewing larvae are known to feed on a wide variety of soft-bodied arthropods including many aphid species, caterpillars, insect eggs, spiders and mites. The use of lacewings to control arthropod pests have been reported for several crops, worldwide. For example, releases of second-instar larvae have proven to be successful for the control of the green peach aphid in peppers, tomato and eggplant. In addition, lacewing larvae have been used to control other pests such as the Colorado potato beetle, European red mite, different species of mealybugs, corn earworm and the tobacco budworm.

The efficiency of lacewings to control pests can be affected by many factors, including: pest type, distribution of the pest (e.g., within and among plants), weather, crop, and number of predators released, stage of predator released, and the predator/prey ratio. The efficiency of pest control can be increased in small scale production systems by manipulation of the environment (e.g., food supplement, attractants, and crop inter-planting), in which the predators are to be released. In addition, a combination of predator releases and environment manipulation will increase the odds of success.

The use of green lacewings in greenhouses can be effective by using multiple or inundated releases. Green lacewing larvae or eggs of the predator can be released to control pests in greenhouses. However, if control is needed in a short period of time, the larval stage is the recommended stage to be released. Good to excellent control has been reported when the predator-prey ratio is between 1:3 to 1:5. The interval between predator releases for optimum pest control in the greenhouse varies depending on the pest species, environmental conditions and potential for crop damage.

For both field and greenhouse pest management, the use of green lacewings can be an effective component of IPM. Green lacewings have also been reported to have a degree of resistance to a number of insecticides. This insecticide resistance can be favorable to maintain predator populations, even when a chemical treatment is needed to mitigate the unexpected increase of pests.