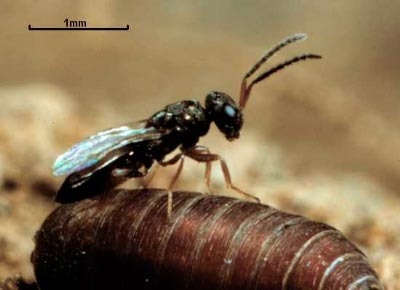 Be the first to review this product
Product ID: PFC
Price:
$22.85
Free Shipping
The selected item is out of stock, please select a different item or combination

Three species of predatory fly parasites mixed in your order: Spalangia cameroni, Muscidifurax zaraptor and Muscidifurax raptorellus.
Fly parasites are an effective natural enemy of flies. Frequent releases of fly parasites can drastically reduce common housefly and stable fly populations. Fly parasites search fly-breeding areas for fly pupae containing developing flies. Once a fly parasite finds a pupa, it drills a hole through the casing and inserts several eggs through the hole.
Once inside, the eggs hatch inside the fly pupa and feed on the developing fly and after two to three weeks of feeding, an adult fly parasite emerges to repeat the cycle. Each female fly parasite can kill approximately 100 immature flies in her lifetime.
Tweet

Fly Parasites Predators are gnat-sized, nocturnal, burrowing insects which do not bite, or sting humans and animals. Adaptable to all climates, these parasites reproduce in one to two weeks, thus constantly replenishing the beneficial insect population. The fly Parasites predators are the naturally occurring enemy of all manure breeding pest flies. In nature these tiny insect predators serve as a major check of fly populations by destroying flies in the immature maggot and pupa stages. Fly Parasite Predators are specific to flies, never attacking anything else. It's important to realize that these tiny wasps have absolutely no effect on horses or humans. They stay close to the manure and dirt where filthy pest, and even if they could reach you or your horse, the fly parasite predators are so small that they cannot sting. Their main purpose in life is to act as a natural predator against filthy flies and they do a great job. Fly Parasites Predators are a preferred alternative to chemical insecticides that are hazardous to human and animal life. NO ADVERSE SIDE EFFECTS. A major benefit of biological control is that it avoids completely the adverse side effects of chemical sprays, such as poison residue in the environment affecting not only the pests but also non-target animals (songbirds, beneficial insects, etc.) and most importantly your domestic stock. This is a serious problem as some of the common spray residues are effective for up to 3 or 4 years, and remember that poisonous toxic chemicals become less effective with repeated use.

Controls flies in animal manure accumulations and other filth fly breeding sites. Very effective against the housefly, biting stable flies, garbage flies, and the lesser housefly which make up to 95% of the flies in manure and other site accumulations. Five percent of the other flies are also parasitized, such as false stable flies, face flies, flesh flies and horn flies, but control is less complete on those flies which complete their life cycle widely dispersed in the pasture.

These small parasitic wasps are the most natural enemy of flies during the pupa stage. We provide several species of the tiny wasps in the genera Muscidifurax and Spalangia that attack and have adapted to different climates with a higher proportion of Spalangia in proportion to Muscidifurax. The eggs of the parasitic wasps are laid inside the flies pupae and the developing flies provide food from within for the young wasps.

Parasitic wasps do not bite, sting, swarm or bother anything else, humans or animals included. Parasitic wasps are nocturnal and are rarely seen during the day. They operate to a depth of 8 inches in the manure, homing in with their biological radar on fly larvae that are about to pupate.

Parasitic wasps arrive in wood shavings developing inside the fly pupa and when fully grown they will cut a hole in the pupal case and exit as adults searching for more fly larvae, seeking to lay their eggs where the flies pupate. The parasites must not be left in direct sunlight or hot areas. They need to be held at 70° to 80°F, increasing to 85°F for more rapid emergence. They should be emerging and ready to release within a day or two.