one package of HB 50 mil. nematodes
one package of SC 50 mil. nematodes
Steinernema carpocapsae and Heterorhabditis bacteriophora an evolved insect-killing nematodes that kills its hosts within a few days of infection. The Steinernema carpocapsae and Heterorhabditis is considered a generalist parasite and has been effectively used to control a variety of pest insects.
Mix the two together and cover up to one acre. $78.50
Price:
$78.50 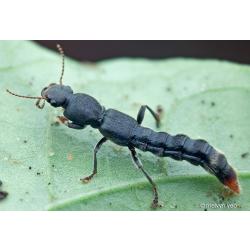 Dalotia coriaria (Atheta) is a soil dwelling rove beetle. It is an effective predator of fungus gnat larvae, root aphids, shore fly eggs, pupating thrips, as well as other small, soft bodied arthropods in and around your rooting system. They are a generalist predator that feeds on a wide range of small insects and mites but is primarily an egg predator. It is harmless to plants and humans. Dalotia can give excellent control of fungus gnats and shoreflies. Dalotia will also prey on moth flies, root mealy bugs, springtails, cabbage root flies and carrot flies. Results have been impressive when used in conjunction with Stratiolaelaps to help prevent root aphids. They also feed on most other small soil organisms such as moth flies, springtails, and root mealybugs.
Price:
$49.85