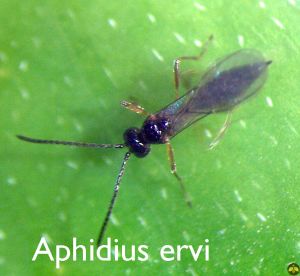 Be the first to review this product
Product ID: Aervi10
Price:
$52.25
The selected item is out of stock, please select a different item or combination

Aphidius ervi attack many species of larger aphids such as the green peach aphid and brassica aphids. As brassica aphids are quite common in gardens, you are likely to see this natural enemy in your garden.
Mummies are 1mm in size and a light bronze color. When the adults emerge, they leave exit holes in the mummies.Larvae are not visible as they are living within the aphid.
Adults are tiny wasps, about 3mm long. They have dark wings and gold and black bodies. Adults are identified by the veins on their wing.
Tweet

Aphidius ervi attack many species of larger aphids such as the green peach aphid and brassica aphids.

A relatively large wasp (twice the size of Aphidius colemani) with a black, slender body with brown legs and long antennae. The female wasp injects an egg in the aphid with her ovipositor. Hatched larvae eat the aphid from the inside leading to the formation of a a golden-yellowish-brown mummy. Finally, a new adult parasitic wasp leaves the mummy through a round hole. Aphidius ervi is shipped as mummies (expect to see some hatched adults on arrival), and is an excellent parasite of potato aphid (Macrosiphum euphorbiae), foxglove aphid (Aulacorthum solani) and the pea aphid (Acyrthosiphon pisum). A strong flier, it can locate small aphid colonies, making it excellent for preventive applications. Capable of parasitizing hundreds of aphids, it can be used for curative applications, but should be used in conjunction with aphid predators such as green lacewings. Life-style Aphidius ervi is originally a European species, but it has been widely introduced into North and South America and other regions in recent years as part of biological control programs for aphids on a variety of crops. Once a female finds an individual aphid or aphid colony, she will palpate the aphids with her antennae. If the aphid she is examining is of the correct size and has not already been parasitised, she rapidly curls her abdomen under her body and stabs the aphid with her ovipositor. This takes less than one second, but in this time the female checks the identity of the aphid with her ovipositor and lays an egg into it if she is satisfied. The egg soon hatches, and the resulting larva begins to feed within the aphid. Initially it will not kill the host, but as it grows it begins to feed on the vital organs so that the aphid dies. When fully grown, the Aphidius larva cuts a slit in the hollowed-out shell of its host and attaches the carcass to the substrate with silk. As it spins more silk within the host skin, this gradually takes on a pale grey color and forms the characteristic ‘aphid mummy’. Within the mummy the larva pupates and after five to ten days an adult is ready to emerge. The adult cuts a circular trap door in the mummy, always on the upper surface at the back, and escapes through this to seek out new hosts. The life cycle of Aphidius ervi takes nearly 19 days at a temperature of 70°F. Although Aphidius ervi is a vigorous parasite, which can attack many individual aphids, it will work best when used preventatively during periods when aphids are expected to arrive in the crop. This will ensure that at least some of the initial aphids colonizing the crop will be found and parasitized, so that colonies may grow slowly or be stopped entirely before they reach damaging levels. There will then be fewer large colonies and fewer aphids will develop as winged individuals to spread through the crop and form new infestation. This curative approach can be achieved using either regular low rate releases of between 1 per 100²ft and 5 per 100²ft/weekly, or by using cereal plants infested with an alternative aphid host which will not attack the principal crop. These ‘banker plants’ are popular with many growers, but they require horticultural care and may need repeated releases of cereal aphids to function correctly. This curative approach may entirely avoid aphid outbreaks, but if not it will slow the development of colonies of aphids to allow the grower extra time in which to act. Aphidius ervi can also be released correctively directly onto existing colonies, but the rapid reproductive rate of aphids and the lag between parasitism by Aphidius spp. and death of the host may allow the population to grow beyond the level at which economic damage is caused. It may therefore be necessary to use some other biological agent such as Chrysoperla rufilabris, or a compatible chemical agent to reduce localized outbreaks to a manageable level before releasing Aphidius.
Login or Register to write a review.