Be the first to review this product
Product ID: ACE aphidius_colemani__ervi_mix
Price:
$69.85
The selected item is out of stock, please select a different item or combination

Aphidius colemani and Aphidius ervi are both parasitic wasps of a wide range aphid species. Using a mix of the two has a far greater probability of success in a greenhouse situation. Aphid endoparasitic wasps including Aphidius colemani and Aphidius ervi are 2-3 mm and 4-5 mm long and slender bodied, respectively. These two endoparasitic aphid wasps are mixed in a single package to target their different aphid species.
Tweet

Aphidius colemani and Aphidius ervi are both parasitic wasps of a wide range aphid species. Using a mix of the two has a far greater probability of success in a greenhouse situation. Ervi are twice the size of colemani which allows them to parasitize larger aphids. The mix works so well because Aphidius colemani deals with smaller aphid species and Aphidius ervi deals with the larger aphids. The Aphidius colemani have a faster reproduction rate which allows them to have a faster effect on aphid populations. If you know that you have a problem with aphids then ideally you should release this product before the aphids usually appear but if they are already present then the control should be released close to the colony.  As aphid populations grow rapidly you need to act quickly. 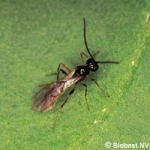 The wasp genus Aphidius is a large group containing numerous species, all of which attack aphids and provide natural control of aphids in backyard gardens, commercial fields, and urban landscapes. They are generally used in greenhouses.
Aphidius colemani are small braconid wasps. Females lay eggs singly in aphid nymphs. The wasp larvae consume the aphids from inside. As the larvae mature and the aphids are killed, the aphids turn into mummies. After the larvae pupate, each adult wasp emerges through an exit hole cut in the mummy. In addition to killing aphids directly, mechanical disturbance of aphid colonies by the searching behavior of the adult wasps causes many aphids to fall off the plants and die.
Price:
$38.25